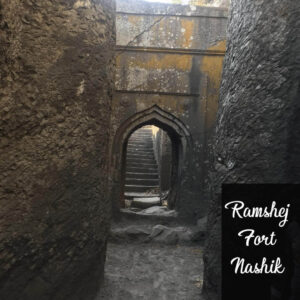 In this article you will get all information about Ramshej fort in Nashik.

A small historical fort is situated at Nashik Peth Road in Maharashtra, at a distance of 14.5 km from Nashik, Ramsej or Ramshej Fort/killa. Ramshej Fort is
located at an altitude of 3273 feet and is one of Maharashtra’s famous monsoon trekking spots.

history and trekking of Ramshej fort in Nashik

Ramshej means Lord Ram’s Foundation. For some time this place was the residence or shelter, which is why it got its name as Ramshej. When the Marathas were under Sambhaji Maharaj’s charge, Aurangzeb decided to fully terminate the Hindavi Swarajya, hence he came to Maharashtra.

The Nashik was in the Mughals hands in those days so they decided to capture Ramshej fort. Yet this proved very difficult to take the fort. Aurangzeb sent a 40,000-strong force of soldiers and canons under the leadership of Shahbuddin Gaziudin Firoze jung. The fort had 600 Mavalas, when the fort was sieged by Mughals. The Mavalas resisted this assault by throwing stones at them, forcing the Mughals to step back.

The siege was strengthened further by the Shahbuddin who blasted the area and made wooden stages for holding his canons and making further camps in that area. For this sort of wars the commander of the fort or killedar was more professional and he put an end to their plans. Shahbuddin built wooden bastions that could easily accommodate around 500 soldiers and 50 canons. Eventually, they cleared the forest to create the entire bastion.

The attempt to attack from the bastion failed. The Sambhaji Maharaj was sent to break the siege in May 1662 with an army of 7000 Manaji More and Rupaji Bhosale. The place close to Ganeshgaon is where Marathas was tested by Shahbuddin. Mughals lost 500 horses to the Marathas, and the Marathas proved victory.

Once again Shahbuddin tensed the siege and began the assault on the fort of Ramshej, and again the mavals attacked with stones thrown on them. Raja Dalapat Rai was wounded in this attack and then they retired. Number of failures made shahbuddin withdraw and left Junnar. It was named for the siege to Bahadur khan. He overhauled the siege strategy and assaulted the castle. Mughal army section with canons and equipment was made to stand on one side of the fort by which Marathas would attack this side and Mughals would attack from the other side.

The Marathas were conscious and split the army into two parts. A tantrik was called to make a new plan but the tantrik asked for a golden snake weighing about 100 tola. With this snake’s aid, he told him that he would lead the army to the fort’s main gate.

He led the army, keeping an eye on the fort before the main gate. We started there stone when the army came to the Marathas goal because of which the Tantrik got injured and the snake fell to the ground. As Aurangzeb said he would return to the bahdur khan, the Mughals retired.

The Marathas battled for the fort for 65 months, the Aurangzeb sent Kasimkhan Kirmani to assault the Ramshej but he also failed. Within a large cave, we can see the fort of ram mandir. The devotees take care of the cave should one live. On the walls of the caves are inscriptions, nearby cisterns where potable water is available.

There is an open tunnel. The path in the vicinity of this cave brings us to the machi. Mukhya Darwaja is the main entrance to the fort under the mountain. This darwaja is now in poor shape. From here you walk to a few water cisterns and a large pond.

During the Navratratras Devi Mandir is often praised. Hidden darwaja can be seen on the fort and two more cisterns, a few house remnants. It takes about 1 hour to reach the top of the fort, forming the base village. It takes hours, in all, to see the fort. We can see from above Bhorgad and Chambar Caves.

Time to reach the top on Ramshej Fort in nashik:
1-2 Hours

2. Soma Service Apartment Nashik:- Soma is also best option for you if you want to stay in Nashik. They have best offers/package for you like wine
tasting at Soma vineyards and many more.

Ramshej fort in nashik for trekking