Dhodap Fort is a hill fort in the Indian state of Maharashtra. In the Nashik district, it is located in the Chandwad and Kalwan talukas. The fort is located at a height of 4829 feet (1472 metres) above sea level. After Salher, it is home to the second highest fort in the Sahyadri highlands. Dhodap is Maharashtra’s second highest hill peak, after Kalsubai and Salher, and the Western Ghats’ 29th highest mountain.

Dressed stone and bricks were used to construct the top of the fort. There’s a tank with a Lord Hanuman statue and a 5-meter-long tunnel. Shembi is a pointy cliff in the fort. Caves can be found at the bottom. A domical construction may be seen at one end of the fort. On the eastern face, there is a dangerous cliff known as Ikhara that is perfect for rock climbers.

In one of the caverns, there is a well-preserved temple. A few more caverns may also be found nearby, some of which are fairly large. The Dhodap fort’s trunk is also in fine shape.

One of the most intriguing features is the movement of a “cow of stone” within this hill. It’s heard by the peoples in the nearby villages that on every Vasubaras, this cow moves inside by the distance of four grains. 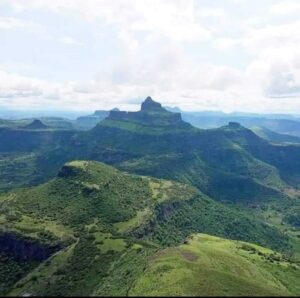 During the Peshwa time, the fort was quite significant. Raghobadada Peshwa concocted a conspiracy against Madhavrao Peshwa here.

Ch. Shivaji Maharaj came here on his way back from the second assault from Surat, apparently to retain the loot. The battle of Dindori took place a few days later.

This fort is a popular destination for hikers and daring travellers. With the cooperation of local residents, lodging may be arranged in the base village. Enough with the drinking At the summit, there is a water source. However, bring plenty of water with you when climbing this fort.

Things to do:- Camping, Trekking, Hiking